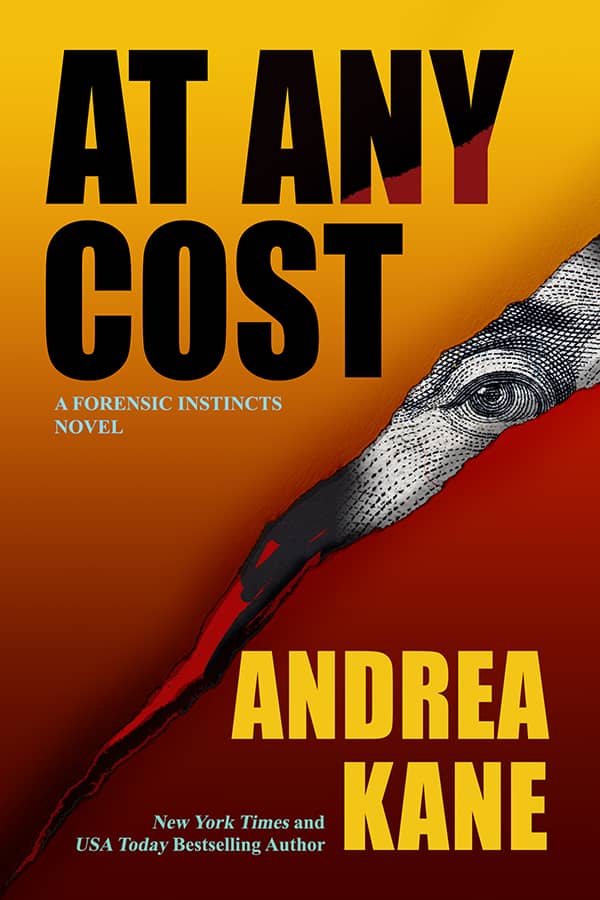 Fiona made her debut in Andrea’s suspense thriller, No Stone Unturned and returned with a cameo appearance in Andrea Kane's latest Forensic Instincts thriller, At Any Cost:

About At Any Cost:

HOW WELL DO YOU KNOW THE PEOPLE IN YOUR LIFE? cOULD ONE OF THEM BE A SERIAL KILLER?

Aimee Bregman had the perfect life. She had an enviable job as head of marketing for an up-and-coming CBD-infused beer that was taking the tri-state area by storm. She had cultivated a massive social media following that showcased the beer at college campus parties and alumni events—and had fun doing it. She had an attentive, steady boyfriend and friends who believed in her. Everything was going right.

But when her long-time mentor, Rita, sets up a business meeting with an important influencer—her life crashes all around her. The casual meeting over drinks suddenly devolves into a shouting match between all parties, and any chance of a new business relationship is over before it begins. Hours later, when the NYPD shows up at Aimee’s apartment, questioning her about Rita’s abrupt disappearance—foul play suspected—Aimee realizes she’s in way over her head.

About No Stone Unturned:

WHAT IF YOU FOUND YOUR FRIEND DEAD AND FEARED YOU’D BE NEXT?

Jewelry designer Fiona McKay is working on her latest collection of Celtic-inspired jewelry. She’s excited by the possibilities uncovered by Rose Flaherty, the antiquities dealer helping her research the heirloom tapestries inspiring her new collection. So when Rose calls to tell her she has answers, Fiona hurries to meet her. But her artistic world is shattered when she finds the lifeless body of the elderly woman.

Why would anyone kill such a harmless person? And what if Fiona had arrived just a few minutes earlier? Would she have been killed as well? Unnerved, she heads for her brother’s Brooklyn apartment seeking advice and comfort.

Ryan McKay, Forensic Instincts’ technology wiz is not amused by his little sister interrupting his evening with his girlfriend and co-worker, Claire Hedgleigh. But when Ryan and Claire hear the details of Rose’s murder, they fear that Fiona could be next, and quickly assume the role of her protectors. What they’re unaware of is how many people are desperately seeking the information now buried along with Rose.

A former IRA sniper. A traitorous killer who worked for the British. Two vicious adversaries taking their epic battle to America. A secret Irish hoard as the grand prize in a winner takes all fight to the death.

As the story woven into the tapestries passed down from McKay mother to daughter unravels, Forensic Instincts realizes that Fiona and her family are in grave danger. Together, the team must stay one step ahead of two rival assassins or risk Fiona’s life and the McKay family tree.

Now let’s take a “behind-the-scenes” look into the creative process of making fine jewelry that Nancy breathes into Fiona.

Being a jewelry maker and goldsmith is part artist, part metallurgist.
Check out this video of alloying 22K gold so that it can be crafted into a piece of jewelry.

That artist is Fiona McKay!

Send Me an Email